Biography: The origin of Glantry Fett like many who carry the Fett name, is shrouded in mystery. He is thought to be the cousin of the famed bounty hunter Boba Fett and the son of Jango Fett's brother - although the death of Glantry's grandparents when his father and Jango were only children prevents the from ever knowing the truth.

What is known for certain is that he grew up on Corellia and was a pilot in the Corellian Security Force. However, shortly after the Battle of Endor, tragedy struck when his wife, Samantha, was killed when their house burned to the ground- a fire started by Imperial stormtroopers mistakenly believing the house to be harbouring Rebels.

Furious with the Empire and grieving for his wife, he stole the Z-95 he piloted and joined the Rebel Alliance - now known as the New Republic.

Several years later, when Nick Fel put together the task force Rogue Squadron, to venture into the Unknown Regions and fight the Goa'uld, Glantry was assigned to them, and given command of the newly formed Nova Squadron - a B-wing unit. He wasn't going to turn this promotion down - but missed his X-wing so much that using money from selling his Z-95 and credits that he won in a high-stake Sabaac game, he bought his own X-wing and an R2 unit.

He has an offbeat sense of humour and is always on the hunt for the next big adventure. He's very focused and critical when it comes to his work but he knows how to have a good time when he's off duty. His favourite pass time is hockey and he'll take any chance he gets to play a game. 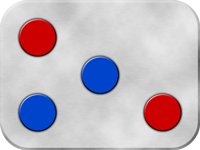